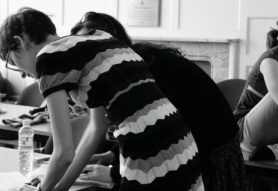 Hartley and Akhurst at a 'Phèdre' rehearsal
Ionian Productions is a multilingual Oxford-based theatre company formed by Modern Languages students in February 2009, when Julia Hartley proposed to direct Racine's 'Phèdre' in the original French, enlisting the help of Polly Akhurst as producer. The sell-out show was performed at the Burton Taylor Studio, Oxford, and its minimalist décor (two Ionian pillars) provided inspiration for the company's name. In February 2011, Ionian Productions put on an adaptation of Stendhal's novel 'The Red and the Black', which featured costumes from the National Theatre in London, and was performed in the chapel of Mansfied College, Oxford. Both productions made us realise that works considered classics on the continent can be relatively unknown in the UK and this increased our commitment to cultural exchange through the medium of theatre.

Since then, Ionian Productions has continued its efforts to introduce Oxford audiences to foreign classics. Casts and production teams have varied across the years, with some recurring figures nonetheless, including Sophie Ablett, Polly Akhurst, Alex Baxter, Helen Gush, Rhiannon Kelly, and Jennifer Rushworth. The company's vision however has never changed as it continues to be led by Julia Hartley, who is Ionian Productions' artistic director to this day. Our most ambitious production to date was a full staging of Pirandello's last play, 'The Mountain Giants' (2012), in a new translation from the Italian with an added final scene. A recording is available here. As well as regular productions across Oxford, we also premièred the piece of new writing ‘Counting Syllables’ at the Edinburgh Fringe and toured Paris and Brussels with a comedy entitled 'Alceste & Juliet', which combined scenes from Shakespeare, scenes from Molière, and new writing. You can find out more about our previous productions here, and read reviews here.